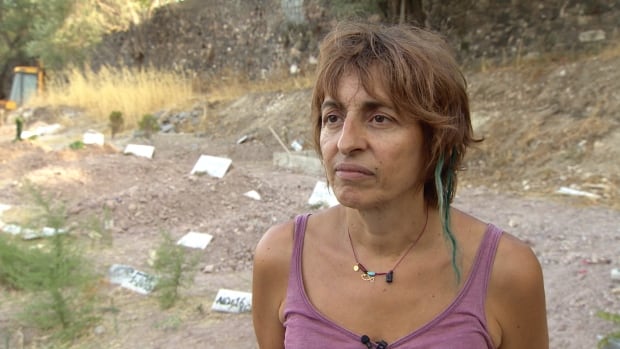 There is a hierarchy even in death. At least on mortal pathways.

That much is evident walking between the rows of white crosses and headstones in the St. Panteleimon cemetery perched high on a hill above the port of Mytilene on the Greek island of Lesbos.

Widows in black tend to the graves, washing down the stone, laying flowers, lighting candles and dusting off the framed photos of the dearly departed that often sit next to the headstones. The widows wave chalices full of sweet incense, and it wafts through the branches of giant fir trees lining the pathways.

Beyond those more ornate plots lie the graves of paupers, those who couldn’t afford a headstone or a proper plot.

And beyond those are the graves of the refugees, tossed up by the Aegean Sea that twinkles in the distance, once known for its benign turquoise waters and now associated with the desperate flight of more than half a million people this year. 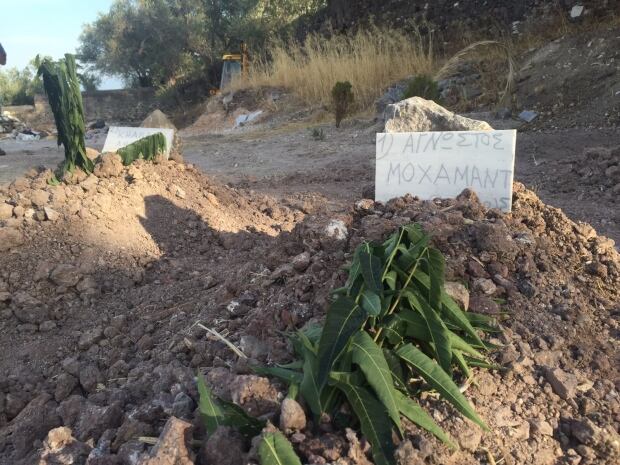 Refugees’ graves are marked by chips of marble or wood on the dry soil of the island. Some bear names. (J.F. Bisson/CBC)

The migrants’ graves are marked by odd bits and bobs, chips of marble or wood, lying flat on the dry soil of the island. Some have names written on them, or an attempt at description: a woman, a Syrian, a child. Many others bear simply a number and a date.

It’s in this section of the graveyard that you’ll find Lena Altinoglou, pacing. She is a local activist who works to help both the living and dead passing through Lesbos.

She tries to ensure that proper burials are carried out for the bodies that wash up unclaimed. Or to help families who arrive searching for loved ones who left Syria or Afghanistan or Iraq weeks before, never to be heard from again. Her cheeks are sunken, her eyes haunted.

“If this happened to my family, or my people, I would like to know that somewhere in the world there are people that take care,” she says. 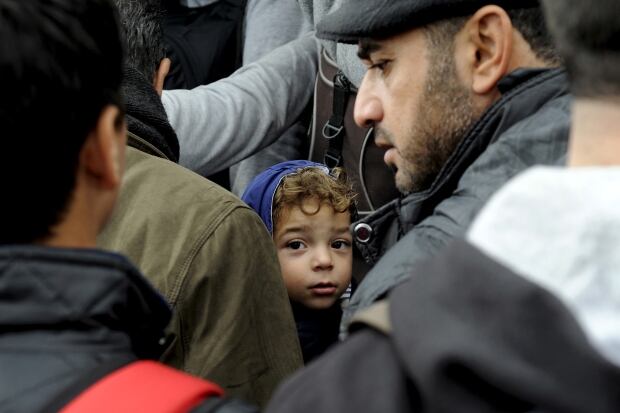 Refugees board a bus after arriving from Lesbos at the port of Piraeus, near Athens, on Nov. 1. (Reuters/Michalis Karagiannis)

“Because burial is a sacred act for us humans, so it would be for me a sacrilege to have people thrown [away]

like a sack of potatoes. They have seen enough of that. It’s just to pay homage to the people. It’s just to make us a little bit more human.”

The refugees’ graves are so numerous they’re right up against the walls of the cemetery. This week the mayor of Lesbos declared there is no more room for the dead.

“Yesterday we held five funerals, but there are still 55 bodies at the morgue,” Spyros Galinos told a U.S. news channel. “Who could have anticipated such a carnage in the Aegean?”

An estimated 435 men, women and children have died trying to reach Greece from Turkey since Oct. 6, according to the International Organization for Migration. That doesn’t include 19 people feared drowned on Sunday and four on Monday, many of them children. 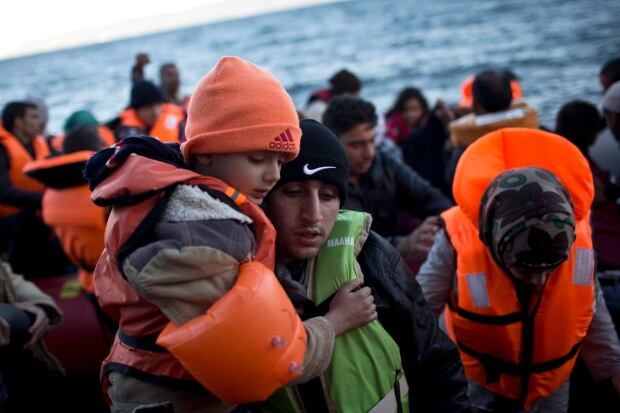 A man carries a child as they disembark a rubber boat on the northern shore of Lesbos on Nov. 2. (Marko Drobnjakovic/Associated Press)

The numbers can become overwhelming, says Altinoglou. But each one is a human, a story, a tragedy that must not be forgotten, she says.

“Like when they bring a five-year-old, four-year-old, six-year-old children and their mothers or grandmothers and you know that they were drowned just because they believed that they would have a better future and instead of that they have what, one metre of ground above them.”

The failure of European governments and those in far-off Canada and the United States to offer solutions makes her angrier and angrier.

“I cannot understand why refugees have to pay €1,000 just to get in a rubber boat over to Greece and then everybody is running around — NGOs, even the government. We are in a crisis but we can’t do much. They didn’t die in their country because

[it was bombarded] they died on the way to find security in life.”

This week Greek Prime Minister Alexis Tsipras is again visiting the island of Lesbos, along with the president of the European Parliament. Tsipras has asked for more help dealing with the crisis, last month saying the Aegean was washing up not just dead refugees, but European civilization.

Apparently a nearby hospital has said it will donate more land to the cemetery so that more of the unclaimed dead can be laid to rest on Lesbos. For surely there will be more.

Altinoglou says the refugee crisis has focussed her thinking — about life and death, certainly, but also about how ordinary people shape the world. That’s why she keeps visiting the cemetery and tending to its anonymous inhabitants.

“You see all this despair and you can’t make sense out of that,” she says. “So this is a place to think about what kind of world we want to have.”

Here is the leaked list of Hillary Clinton’s mega donors

August 2, 2016 Dusty Fields Comments Off on Here is the leaked list of Hillary Clinton’s mega donors