By Amanda Wells @amandawellslit, October 12, 2016 – As the bizarre events of the 2016 election have unfolded, TV pundits and social media users have begun to single out a formerly obscure book by a retired college professor and bestselling author – originally intended as a fictional parody – that has actually predicted the events of Donald Trump’s campaign with uncanny accuracy, from his attacks on the Gold Star Khan family to Fmr. Miss Universe Alicia Machado to the Access Hollywood tape, even down to predicting John Oliver’s popular rant on Trump.

Handing Hillary the Presidency, On Purpose?

As shown in the graphic below, timeline of Trump’s most damaging behaviors has followed his strongest polling points, lending credence to the book’s theory – originally humorous, but now looking more and more real – that Trump is throwing the election on purpose.

Clinton v. Trump in the polls – chances of winning the election
From FiveThirtyEight.com

Trump sabotages himself every time he’s strong in the polls:

As this timeline of Trump’s controversies from the Financial Times supports and as the book predicted, each major controversy occurred just as Trump was strongest in the polls, driving him back down to a losing position. Compare the timing of these events to the chart above.

Trump was actually polling fairly strongly in late May before, as you can see above, he begin to fall in the polls after attacking a judge’s Mexican heritage on May 27th.

The next time Trump was competitive in the election, even beating Hillary in the polls, late July, he called on the Russians to hack into and interfere with the election, again driving him back down along with his outrageous attacks on the Gold Star Khan family.

Finally, Trump ensured his own loss by nosediving off of his strongest polling of the Fall at the end of September by attacking Fmr. Miss Universe Alicia Machado in crazy 3am Twitter rants and then suffering the release of his “locker room” brags of groping women and then turning against Paul Ryan and declaring war on his own party. 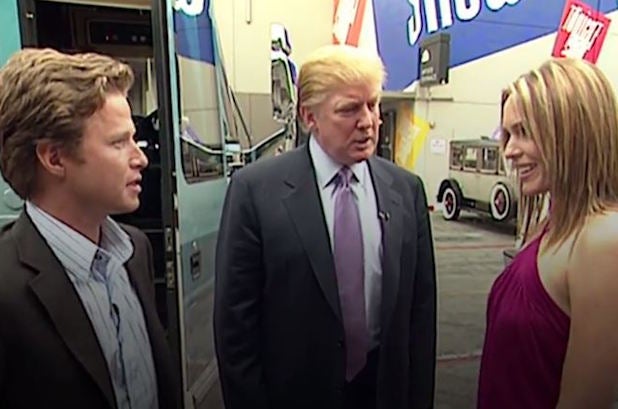 The book, written in Trump’s own voice, predicted the Access Hollywood tape with language such as “I’ve been known to steal the show when it comes to taking a woman home” and “I’m so sick of women whining “use a condom, use a condom.” If I wanted to s**** a plastic sheet I’d let Goldie Hawn b*** me. Believe me, she would. She wanted to before she was plastic. I wouldn’t let her.”

An entire chapter of the book is entitled, “Systematically Dismantling the GOP,” saying:

“The GOP was ripe for devastation, and I was the Grim Reaper. That’s why we had to get rid of the Republican party. They were past the point of hope. They were weak. That’s when you go in for the kill,” which is exactly what Trump ended up Tweeting this week:

Our very weak and ineffective leader, Paul Ryan, had a bad conference call where his members went wild at his disloyalty.

“I had no connection to the GOP. None. But I took it over. It wasn’t even hard. I took it over in 5 months. That’s how weak and rudderless it was. Now I’ve decimated it. It’s the greatest political achievement in our history. “

Calling it Way Before John Oliver

The book even predicted John Oliver’s rant about Trump dropping out to prove a point. When John Oliver advised Donald Trump on Last Week Tonight to drop out and declare his whole candidacy a stunt, his arguments closely followed points previously made in the book released six weeks prior by the former University of Virginia instructor. The book – which predated Oliver’s broadcast by more than a month – presents the same arguments Oliver did, in much the same way.

The Nostradamus of the 2016 Election?

Any way you slice it, it seems social media and mainstream media is beginning to pick up on these uncanny coincidences between what was meant as a humorous parody and what the 2016 election has actually become. The author, Kreston Kent, previously hit the nail on the head with his book on rapper Lil Wayne, who said that the book “was like looking in the mirror.”

Much luv for Professor Kreston Kent!

Check out the crazy-accurate take on Donald Trump here: www.unauthorizedtrump.com