Some men with low-risk prostate cancer in Canada may be opting for surgery with life-changing side-effects without fully understanding their options, says a new report.

When prostate cancer is diagnosed while it is confined to the prostate, it is often treatable, but it can be aggressive in a subset of men, urologists say.

In Canada, active surveillance is the preferred approach to manage low-risk prostate cancers. It involves monitoring levels of prostate-specific antigen or PSA in the blood every few months, along with regular prostate biopsies and rectal exams to watch for signs of cancer progression, the Canadian Partnership Against Cancer says.

In contrast, more than half of low-risk prostate cancer patients in British Columbia, Alberta, Saskatchewan and Nova Scotia were treated with surgery, radiation, or a combination, treatments with possible side-effects that include erectile dysfunction and incontinence.

The group said it’s the first time they’ve been able to investigate the variations in treatment across Canada. 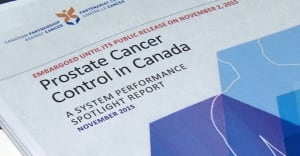 The report is the first to investigate differences in prostate cancer treatment using data from across Canada. (CBC)

“What we found was there was a lot of inconsistency,” said Rami Rahal, director of system performance and surveillance at the Canadian Partnership Against Cancer in Toronto.

Clinical trial results point to the same survival benefits from active surveillance as treatment with surgery and radiation for cancers that haven’t spread beyond the prostate.

But each patient has their own individual preferences and quality of life considerations given their personal circumstances, said Rahal.

“In some cases they might feel, you know what, I just don’t want this tumour inside of me, even though it may not grow, I want it out and I’m willing to wear a diaper for the rest of my life. That’s fine, I just don’t want that tumour. And in other cases, patients might say, my quality of life needs to be taken into account, I want it to be monitored and avoid the surgery as much as possible.”

One of the limitations of the research is that Ontario and Quebec were excluded from the active surveillance findings.

Every year there are 24,000 men who are diagnosed with prostate cancer in Canada. It kills about 4,100 each year, according to the Canadian Cancer Society.